Here is the the video explaining The Scott Trust.

Having the organisation non-profit means once funds are paid, all money can then be pumped back into the organisation. Having a privately owned company allows you to control what you publish which can be stories biased to the organisations political beliefs. This can be seen here, with headlines from left and right wing newspapers: 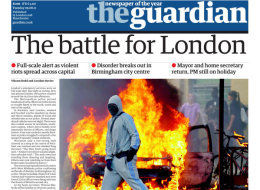 The Guardians headline during the London Riot was “The battle for London” This is a left wing headline as it isn’t persecuting anyone as being wrong, it describe the riots as a battle which refers to there being two side to it.

This headline is quite right wing. Its very much in favour of the government. They use the Word ‘Anarchy’ to install fear and to say if this continues there will be no leaders.

Having privately owned press control what they put in the press has its advantages and disadvantages. An advantage is people buy and read the press that they feel is in their political views so it categorises people to their political bias. This keeps people happy as they are hearing and taking in the things they want to take in. The disadvantage is that you’re not getting the whole story, a lot of it can be censored if it doesn’t agree with the companies views. The only way you can rely that you’re getting the full story is by the companies ethics they set out. The Guardians are based around ‘Fairness’ they believe that everyone deserves a voice whether it be the opposition. In their editorial code it says “Fairness, the voice of opponents no less than of friends has a right to be heard”. So in the current system the only way you can know to trust you’re getting the full story is putting your belief in the organisation and trusting that they stick to their editorial code.

A example of a publicly owned press is the BBC. The BBC is owned by the public as the public have to pay a TV licence which enables the BBC to be funded. As it is publicly funded they try to publish fair and balance views throughout the organisation. A way they do this is through its many channels which have an audience in mind, examples are: BBC3 has a target audience of age 16-34 so they tailor the programs to that age range while BBC4 is aimed at viewers who enjoy, art and science documentaries and vintage dramas.

As the BBC is publicly funded it produces its own programs instead of having an external company do it. This can be a problem as the BBC can have its own beliefs therefore they decide what goes into a program, this can seem like ideology to the audience.

http://digitaljournal.com/article/351075 This link shows examples of how the BBC has been biased. A reason why the BBC might come across as biased is because it is publicly funded they will choose the story the majority support in order to support the people providing them with money.

Overall I think the current system of private and publicly owned press should stay in place. This is because currently in the UK there isn’t any obvious problems with the stories being reported by public and private ownership. Stories should be monitored for ideology by a non biased organisation which could include people with balanced views that come to a group decision of what is balanced and what isn’t, this will be based on the authenticity of the evidence provided by the press. This could be seen as a problem as people will consider it to be censorship as it doesn’t explore freedom of press. Censorship is the state having suppression of speech and communication, similar to China’s media industry. We don’t want censorship so In order not to represent censorship, the stories being reported have to be fair and accurate, by using evidence from both parties to allow people to come to their own decision and develop a opinion based on evidence not just the opinion of the press.

One of the current ethical debates in the media right now is the Edward Snowden case, in which Edward Snowden exposed information that the NSA were spying on citizens of the world. Edward Snowden was an employee of the NSA (National Security Agency). The exposure of this case came about when Edward met up with a journalist to tell them what he knew about the NSA, the journalist then had to make a decision on whether to make the information public. The ethical issue for the journalist now was what to do with the information. The issue would be whether he had the right to possibly disrupt a NSA operation by informing the public. The Guardian were the news paper to firstly publish the information following their own ethics of “Preventing the public from being misled by an action or statement of an individual or organisation.” The Guardian having this regulation in place meant that they saw it as a duty to expose the NSA’s behaviour. They were sure the information was accurate by following their ethics and regulation of “The press must take care not to publish inaccurate, misleading or distorted information, including pictures”. An issue faced with publishing this sort of information can result in people being in danger as the NSA claim they were spying on people who were a possible threat to public safety. So therefore exposing it may result in a change in their behaviour therefore they could avoid detection. Another issue is the safety of the whistle blower, Edward Snowden. He is now living in asylum in Russia as he has an outstanding arrest warrant in the USA for exposing the wrongdoings of the NSA. Demonstrating democracy means nothing in America now?

Edward Snowden explained why he leaked information about the NSA.

This is the Guardians editorial code:

Another issue with the media is how genders are portrayed. There is a debate that women are seen in the media as being exploited. They’re penalised through their looks. an example of this is a Vanesa Hudgens headline “More hobo than boho! Make-up free Vanessa Hudgens is a mess in sloppy mismatched outfit after workout” The Daily Mail refer to her as a mess because she isn’s wearing make up and hasn’t got the best clothes on. They’re creating an idealism that it isn’t okay for girls to be them selves. They are expected to always look there best and no follow the set standards that girls should “stay classy” I suppose.

http://www.dailymail.co.uk/tvshowbiz/article-2617212/Make-free-Vanessa-Hudgens-mess-sloppy-mismatched-outfit-workout.html (here is the link to the story)

On the surface the guidelines set by the company appear to work and appear well regulated, careful not to exploit people. But it isn’t always like this. News Of The World were caught and prosecuted for phone hacking. They hacked a number of peoples phones including murdered school girl, Milly Dowler giving the impression that she was still alive. This breached their privacy policy.

If i were to redesign the current regulation system I would keep in the personal regulations that the organisations set as they work well and provide mostly honest news to be published with ethically sourced evidence. But to avoid a repeat of such cases as Milly Dowlers phone hacking I would have a team made up of journalist to analyse the authenticity of the information that is presented. There will be regular reviews of research gathering methods to ensure there is no wrong doings.

There is a current press redesign in consideration right now which is called the Leveson enquiry, here is an overview of that:

The Leveson Inquiry into the culture, practices and ethics of the press was approached in four Modules. These are:

Module 1: The relationship between the press and the public and looks at phone-hacking and other potentially illegal behaviour.

Module 2: The relationships between the press and police and the extent to which that has operated in the public interest.

Module 3: The relationship between press and politicians.

Module 4: Recommendations for a more effective policy and regulation that supports the integrity and freedom of the press while encouraging the highest ethical standards.

This seems like a good way to run things and yes it would be but the problem doesn’t lie with every media organisation so to bring in the Leveson methods could maybe complicate the way the press in running for the companies doing no wrong. Where as my idea allows companies to continue following there own set standards but allows wrong doing to be noticed and dealt with.

The way people are currently employed in the media industry is through people gathering qualifications in the media industry ranging from college qualifications to degrees in media. People will then apply for a media job position hoping the company notices there interest and employs them. Having things such as soft and hard skills can help improve your chances of employment. Soft skills are described as personal attributes such as confidence and enthusiasm. Hard skills are describes as things that are learned such as camera skills and graphic design. Having such skills can aid to increase your chance of being employed in the media. This is because you may be able to offer more to the company by having multiple skills that someone who is just specialised in one field.

http://www.kent.ac.uk/careers/sk/top-ten-skills.htm Here are skills that are meant to aid you in getting employment.

The current way people are employed seems fine on the surface, but it is meaning that people are going into industries to work at their standards with no real experience of the media work place. The only experience is college/university. A way to get around this is to adopted the American ethics on their media employment. They have a Scholarship program which the UK could learn from. It could result in the media having richer content. The way they work is people work in a job placement along side their studies. This enables the person to gain the employable skills from the qualification and to develop work place skills. Another method for employment is to invest a lot more in free lance workers. Doing this will help support local businesses. it can keep costs down. For example a company may want a piece of graphic design done. But instead of employing a permanent graphic designer, the company would just contract a free lance designer to do the piece of work needed. This allows the designer not to be tided up with one company and gives them a lot more creative freedom which designers and artists appreciate. Working with free lancers also allows business advisers to prosper as they help people in the creative industry to create a business.

Some jobs may start to disappear from the media as time goes on. Jobs such as print operators due to media being profoundly dominated by the digital age. Because of this possible change companies should expect a higher demand in other media sectors such as web design, photography and graphic design. Companies should not start to consider the training of staff in these fields to ensure they don’t get left behind in an old system. As everything is going digital App design will have to advance in a way that supports everyone from young to old. Children will have to have apps that are user friendly, ensure child safety and encourage learning. While adults will need an app that is easy to use and informative.  As apps have only been around since 2007 it is a modern craft which many more people will have to learn as the media advances. It should be the responsibility of the media company to ensure that the apps developers learn the trade so they can continue to have employable skills.

Here are jobs that weren’t around 10 years ago. App developer and social media managers being two of them: